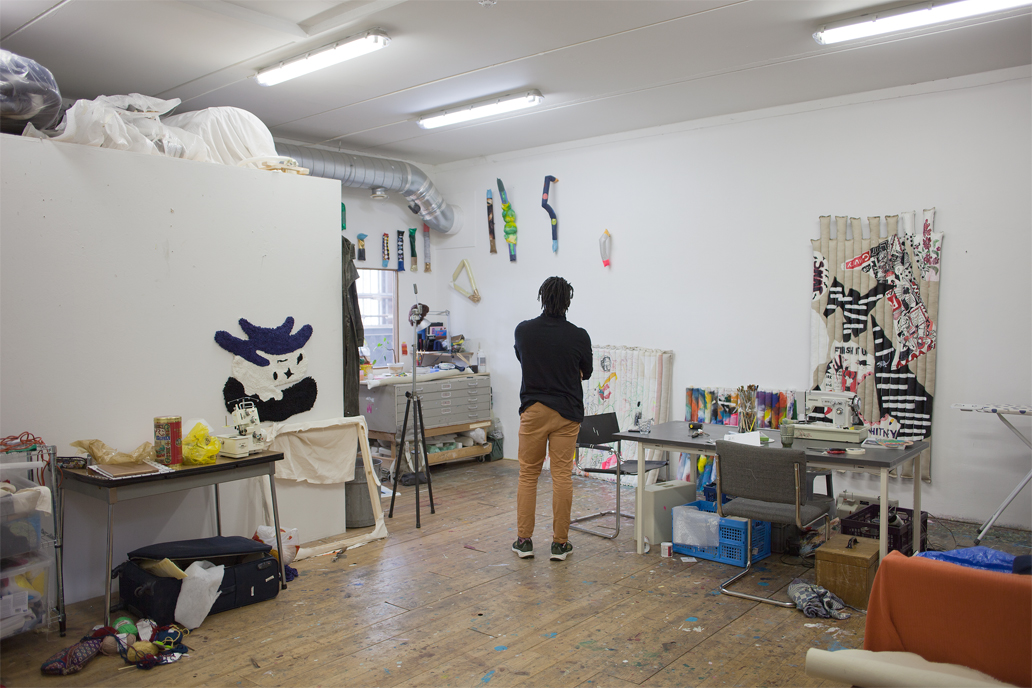 The motives of Neil Fortune.

Always in dialogue
"Everyone looks at reality in their own way. Think of it as a diamond.  By discussing each other's divergent points of view, you can come to new insights together". It is a philosophy of life that runs like a thread through the work of visual artist Neil Fortune.

It's not surprising that Neil Fortune realized one day that he couldn't tell his whole story by painting alone. He started making large floor installations out of white and later black and white textile cylindrical shapes in order to create a stage for dialogue with his exhibition audience: 'social sculptures'. It had to be work you can stumble over "My art is like a hook, an insertion to make you think about things for a moment".

About three years ago he wanted to apply the cylindrical shapes differently and the wall objects came into being.  It felt to him as if he took the ribs out of his social sculpture, to create something else with it. He gave the exhibition with this new series in 2019 the title "Colorful ribs and guts of Adam", a biblical title, in order to emphasize the new phase in his work. In this series he is mainly concerned with how the viewer experiences the work, although here too there are social and political references.

Tactility & materiality
Neil Fortune was born in Guyana (1983). At the age of six he left with his parents for Suriname. Since he started studying at the Gerrit Rietveld Academy in 2007, he lives in the Netherlands. In Suriname he drew and painted a lot. At the Rietveld he made spatial works with different materials. In 2017 he started translating the colors from his paintings, abstract works of architectural spaces, into hanging sculptures. Since 2010 he started working with textiles. From Suriname, or actually from every country he visits, he takes pieces of textile with him, rags of 1 - 1,5 meters. There is a small spaghetti work, as he calls it himself, in which he has processed the typical Surinamese pangi fabric, checkered textile intended for traditional Surinamese clothing. He dipped the ends of his cylinder objects in the paint. Once dried, they look like ceramics. Although he often uses textiles, he likes to combine them with materials from the art of painting. In the hanging objects he is concerned with the game of illusion and reality. "Textiles are pre-eminently suited for this purpose. It invites to touch. Your senses want to be part of looking and the texture triggers curiosity".

Titles
For Fortune titles are almost the second work. Normally a title refers directly to the content. He finds that too interpretive. Listening to music in his studio sometimes results in an association with what he is doing, or with his thoughts at that moment. That's why he gave the 'spaghetti works' music titles. And sometimes the title is born before the work is even there, like 'Colorful ribs and guts of Adam'.

Black Lives Matter
This summer Neil participated in the group exhibition 'Matter' in Houston (USA), of which part of the proceeds went to the Black Lives Matter Global Network. "There will have to be more talk about the pain that the black community has experienced and the discrimination that still takes place today. I am happy that now, all over the world, the support is coming from outside the black community as well. We have all created the culture, with all its traditions. We can also change it together".

Together' is also an important word in his latest series of textile objects, 'Traces of a Conversation'. He sees them as the result of a performance. Fortune sewed two pieces of cloth in vertical stripes on top of each other and invited a conversation partner, interested in what the conversation would yield in terms of images. This turned out to range from monotonous color planes and abstraction to figurative in which Fortune remained the director of the end result. After the session he filled the strips with polyester and stitched them closed. "What you see is actually a remnant of a ritual.

Neil Fortue (Georgetown Guyana,  1983) lives and works in Amsterdam. Fortune started his former studies at the Nola Hatterman Art Academy in Paramaribo Suriname where he was trained in drawing and painting before moving to the Netherlands with a scholarship offered by the Suriname & Dutch government to study Fine Arts at the Gerrit Rietveld Academy; University of Applied Sciences, Fine Arts and Design in Amsterdam. In recent years Fortune has been the subject of group and solo exhibitions at international institutions as MHKA, Museum of Contemporary Art Antwerp, (Belgium), TENT Rotterdam (The Netherland), The annual Summer Show at Gemeentemuseum Den Haag (The Netherlands), C & H-Gallery Amsterdam. In 2017 his works was nominated winners of the Summer Show hosted at Nieuw Dakota and Francis Boeske Project (The Netherlands). Galerie23 (The Netherlands) was the host of his first and second solo exhibitions in 2013 and 2016. Fortune's latest solo exhibition, Distorted Reality, was exhibited in the Polar Room at W139 in Amsterdam. While his most resend group exhibition Dutch Colorist 2019 currently on shown at Dedee Shattuck gallery in Westport Massachusetts (US). Fortune is  currently working on new projects for his upcoming solo exhibition in the Colorful Ribs and Guts of Adam at Gray Contemporary: Houston Texas (US).