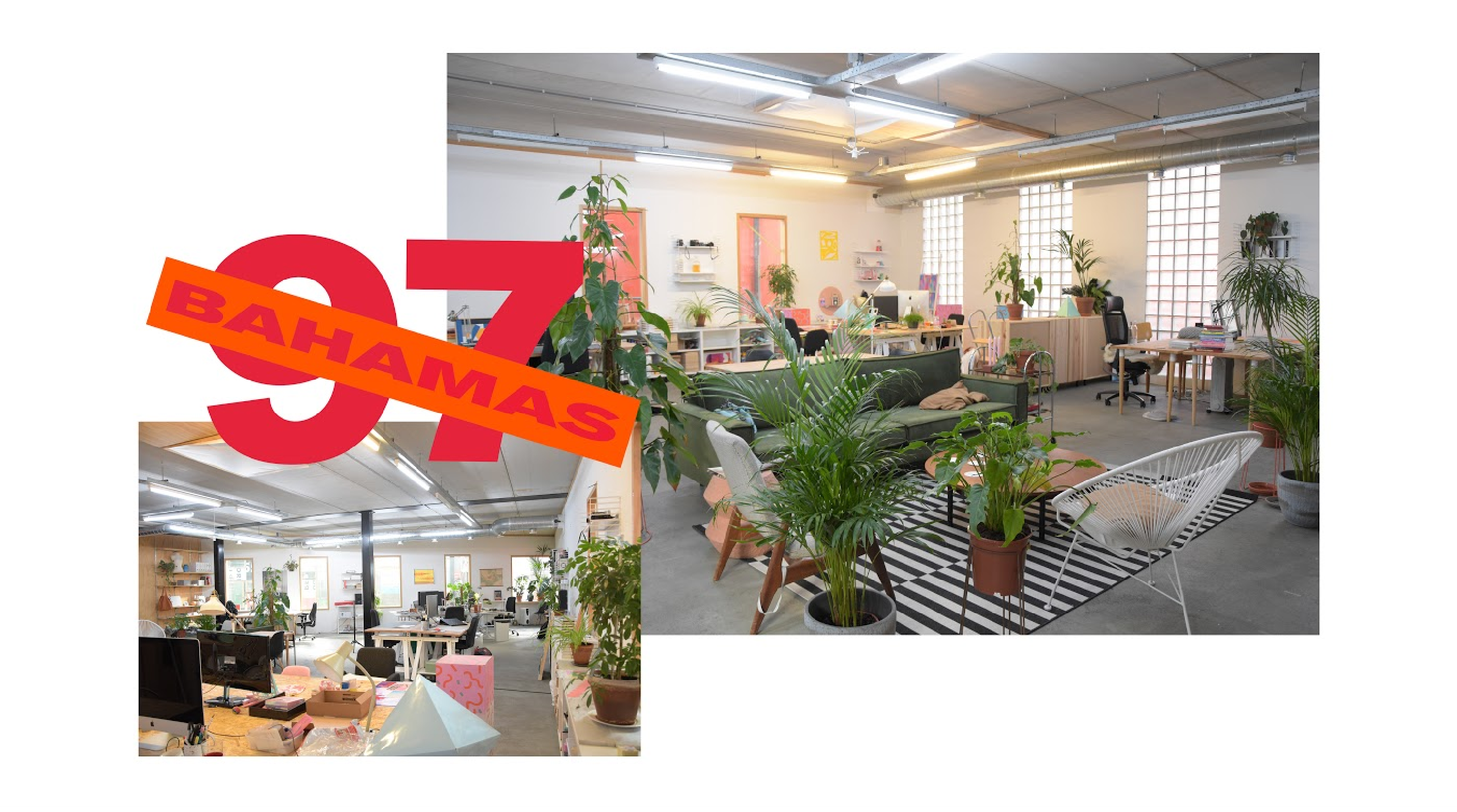 The Bahamas Lounge 97 is a shared workspace slash island archipelago for creatives.

Hyper Epic
Lyangelo Vasquez is a historian, director and the man behind the studio Hyper Epic. The studio creates documentary content based on hardcore realities. This content can take shape as videos, multimedia interactives or physical objects. Hyper Epic's approach varies from project to project, depending on concept and audience. Whatever the form, a narrative approach is always key. Hyper Epic has recently created content with Dutch cultural institutions like VPRO, NTR, de Volkskrant, Beeld en Geluid and Rijksmuseum, brands like DEGIRO and Remy Martin, and with creative studios like Random Studio and New Amsterdam.

Jeannette Weber
Jeannette Weber is a research based designer living and working in Amsterdam and Cologne. Working in interdisciplinary networks she thrives to create change through design in social and urban contexts.

Jongsma + O'Neill
Eline Jongsma and Kel O'Neill are Jongsma + O'Neill, a Dutch-American directing team specialized in documentaries and cutting-edge storytelling. They conceived and directed PBS's Emmy-nominated, Webby-honored interactive documentary series Empire, as well as the groundbreaking VR documentary The Ark, which won the inaugural Tim Hetherington Visionary Award, and was one of the first 360 video projects distributed by Hulu. Their work has shown at festivals and museums all over the world, including Tribeca, The New York Film Festival at Lincoln Center, REDCAT, Rencontres d'Arles, The Stedelijk Museum Bureau Amsterdam/CBK Zuidoost (BijlmAIR) and AFI Docs, and they have worked as directors and journalists for Vice, HUMAN, NOS and the VPRO. Between them, they hold fellowships from Sundance New Frontier Program, the Eisenhower Fellowships, and the Economist Media Lab.

Levy Toredjo
Levy is the connector, with years of experience in various commercial roles, Levy can help you pursue your ambitions and expand your business. Let's make it possible as we are all Made in the Universe. At this moment he is part of the International THE SKIN DEEP team, spreading stories and human connections. Curious? Let's talk.

Marta Veludo Studio
Marta Veludo is a graphic designer and art director inspired by the pop-culture, folk art, pound shops and tumblr, fascinated by inventions, colour, movement and compositions. She designs & conceptualises for both cultural and commercial fields. Whether in the digital realm or on a three-dimensional scale, she combines different disciplines and mediums to build engaging experiences.

Nastia Briak
Nastia Briak is a Russian illustrator that recently moved to Amsterdam. Nastia finds inspiration in unpredictability of real-life textures, bold shapes, and funny characters. She has strong passion for animation, loves to experiment with mediums and formats. Clients include Coca-Cola, Snapchat, Google, Adobe.

Samantha van der Werff
Samantha van der Werff is a graphic designer, art director and apparel developer. Her works consists of creating identities through design, setting up campaigns, video creation and apparel development. She enjoys working for companies with a big social, ethical and environmental aspect to them. Apart from that she has created a lot of artwork, video’s and stage outfits for people in the music industry. She enjoys translating their music into a visual identity through artistic expression. She also is an apparel developer for woman (mostly lingerie and stage outfits), creating garments woman feel comfortable and powerful in, focussing on making them feel proud of who they, no matter what.